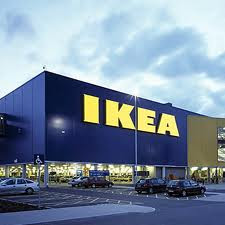 I went to Ikea yesterday. I’ve just moved with my little boy from Cleveland to Minneapolis. The house has been divided, and there are holes, holes that can only be filled by the smooth assemble-it-yourself furniture of these sanguine Swedes. Ikea is a point of view on the world, it proselytizes optimism through its relentless mass production, it tells us our society can endure, we’re all going to be all right, everyone can have wardrobes and endtables and bookshelves, because there are kits for these kind of things, kits you can do with your own hands, and there is no need for despair in a world with such things.

I have to lay down the GNP of a small non-Scandinavian country at Ikea over the next couple of weeks, but yesterday I just bought my little boy his first big boy bed—or rather the pieces thereof. It is a hope of a big boy bed, a promise, a collection of predrilled beams, screws, and those little wood thingys that hold shit together, if only you can jam them in right. It is a dream—but this dream, at least, comes with instructions.

I don’t know what I’m doing. I can only assemble a plot, and that just barely. I have bronchitis and am coughing up things from a dystopian novel. There are wordless instructions with smiling Swedish stick figures who try to demonstrate for me, but they lack the depth. They try their best, but they have dots for eyes and no sense of the complexities of being alive in today’s world.

The smiling Swedish stick figures tell me I need a hammer and two screwdrivers. I don’t have any tools. My former husband has all the tools. I have all the cookware. He will be filleting with screwdrivers while I hang pictures with a spatula. I don’t have a hammer or a screwdriver. I just have this pile of oppressively optimistic pieces, fear, and a prepackaged allen wrench.

Still, I did it. I assembled the bed. Things went in the wrong places, there was a tapestry of expletives, there were bruises both actual and metaphorical. But I made the damn bed on my own. That odd, unfamiliar feeling I had when I was done I realized later was a sense of accomplishment. There are kits for these sort of things you see.
Posted by Anne Ursu at 12:46 PM