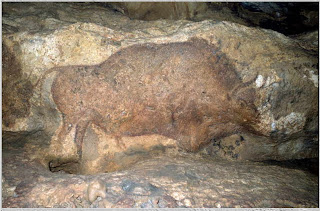 Hi folks, I’ll be chiming in again for a while. I had the good fortune to travel to France earlier this spring and see some of the breathtaking cave art that dates back 30,000-15,000 years. Throughout the caves, guides pointed out sophisticated use of perspective and nuanced gesture—similar to techniques that were considered groundbreaking during the Renaissance.  The artists often used the three-dimensional quality of cave walls to convey musculature in the horses, bison, mammoths, elk and other animals. This picture, from the French Ministry of Culture, shows a bison painted in Font de Gaume Cave. Notice the bulge in the rock that helps define the arch of the shoulders and back? One guide posed: “Were artists painting animals onto the rocks? Or were they bringing to life animals that they saw existing in the cave walls?”

This reminded me of that quote from Michelangelo: “In every block of marble I see a statue as plain as though it stood before me… I have only to hew away the rough walls that imprison the lovely apparition to reveal it to the other eyes as mine see it.” And it reminded me of how once writers move past the first blush of a first draft, those words become our roughly hewn marble.

Traditionally cave paintings were thought to have been created by shamans in a trance. Maybe. Scholars are constantly evaluating the evidence for that and other theories. I wonder if the explanation is simply that the hearts and minds of artists 30,000 years ago were similar to those of Renaissance artists and of artists today. Aren’t we all trying to create some meaningful reflection of our world that others will recognize too?

The next time you’re reviewing a draft and wondering what to do next, take comfort in this kinship with artists that goes back to the very origins of art. Hopefully, as Michelangelo described, we will all see the angel in the marble and be able to carve and revise until we set him free.

Posted by Cheryl Bardoe at 9:33 AM