Today's Inkpot post is from Claire Rudolf Murphy*, an amazing author and MFAC professor at Hamline University.  Diversity is a big topic, and one Claire explores through the examination of two Alaskan novels, My Name is Not Easy and The Smell of Other People's Houses.

Hello, Inkpot Readers. My awareness of the need for more diversity in children’s books has been deepened by our work in the Hamline MFAC program. As we read more widely and I reflect on my own work and respond to student work, my understanding has grown, but also a realization about how complex it is to get it right. Diversity comes in many forms - along with race and culture, it includes religion, social and economic levels and setting. Regardless, we must do our best to avoid stereotypes. A nonfiction writer can only write what actually happened, so the diversity comes by doing far-reaching research on one’s subject in all its complexities.

A novelist has many choices when developing a cast of characters. I learned a great deal about culture during my 24 years in Alaska, but in my first novel I failed the stereotype test. To the Summit features white climbers on an expedition up Denali (Mount McKinley.) I wanted to include a Native Alaskan character, so I developed a Yup’ik guide named Gabe based on my experiences teaching in a Yup’ik Eskimo village for three years. I got help and worked hard to get the cultural details right, but looking back I realize how unlikely and inauthentic it was to write about a Yup’ik person from the coastal part of Alaska who climbed mountains for adventure rather than necessity.

But two current Alaskan writers succeed admirably, their stories featuring characters of many cultures. Debby Dahl Edwardson was raised in a Norwegian Minnesotan family, but for 30 years has lived in Barrow, Alaska with her husband and his extended family. Fro her web site: “My husband is Inupiaq (Eskimo) and most of the stories I write are set within this cultural context. It is not the culture I was born into but it is the one I belong to, the one that has become home to me as a human being and as an artist.” (See www.debbydahledwardson.com.) 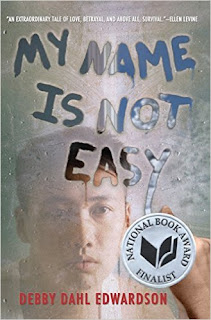 Debby’s novel My Name is not Easy, a National Book Award finalist, is based on her husband’s experiences attending boarding school with Alaskan Natives of many cultures. I taught at a boarding school similar to the setting of Debby’s story and can speak to the authenticity of her teen characters and how the white adults running the school have good intentions, but make many cultural missteps. Not surprisingly Debby has been asked many times about writing about other cultures. “People want to know what constitutes authentic writing from a cultural perspective. They want to know how to tell whether the books they are reading or writing are authentic to the cultures they represent. A good part of this comes from recognizing your own cultural bias.” Listen to her interview at: http://media.aprn.org/2011/ann-20111027-07.MP3

On a guest blog post about writing across cultures, she wrote: “People sometimes say that I write outside of my own culture or that I write through a borrowed culture. I can't imagine consciously doing any such thing. If you understand the worldview of your characters and write from within that worldview you are not writing outside of anything and you are not borrowing—you are immersing yourself within. Does your own individual perspective on life bleed through? Sure. But you are aware of this and you control it—not as a bad thing, but as a conscious thing.” See: cynthialeitichsmith.blogspot.com/2011/11/guest-post-debby-dahl-edwardson-on-lens.html 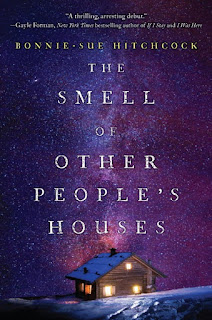 Bonnie-Sue Hitchcock, one of our Hamline alums, recently published a novel set in Alaska called The Smell of Other People’s Houses. An earlier version of this story was her creative thesis. Based on her childhood memories, experiences of family members, friends and her own children, and her work as a reporter with Alaska Public Radio, the story features characters from Alaska’s many cultures. Tough things happen to all the characters, no matter their culture. From my years living in Alaska, it felt authentic. Bonnie-Sue uses cultural details and it is clear which cultural group a character is from. But she also spoke to the fluidity of Alaskan culture. In an email to me she wrote, ““One thing I do know is that you can't tell if someone is native or nonnative based on their skin color and what I love about Alaska is that we're all kind of in it together. But as kids, we didn't care about what race you were. We cared whether you were fast enough to be on our swim team relay, or if your mom made better after school snacks.”

But Bonnie-Sue also spoke to me about the responsibility writing about this setting and these characters. “Did I do this right? Did I do it justice? She laughingly told me she is working on a story right now in which “place isn’t such a huge character.” Alaskans have embraced the novel. And readers unfamiliar with Alaska will come to experience it through these well-rounded and riveting characters. Bonnie-Sue worked hard to make sure the cultural details remained in her story. And she won another fight, too. “Normally audiobooks are read by professional actors. But I knew that the voice of Dora had to reflect her character--a young Inupiaq girl. I sent the New York producer some news stories featuring teenage voices that I had produced in Alaska and she agreed with me that Dora's character absolutely needed authentic representation." An Alaskan actor was hired.

Learn more about Bonnie-Sue at her web site www. Hitchcock.bs.com. Listen to her interview: http://www.kcaw.org/2016/02/22/author-writes-about-smells-and-memories-in-new-book/. I also posted a more detailed review of Bonnie-Sue’s book this week at: http://renegadesofdiversity.weebly.com/blog/april-04th-2016.

Thank you, Debby and Bonnie-Sue for showing us the way by writing such powerful stories with diverse characters.


*Claire Rudolf Murphy is the author of over a dozen books of fiction and nonfiction and a professor in Hamline University's Master in Writing for Children and Young Adults program.  To learn more about Claire and her writing, please visit her website or faculty page.