On Sunday, July 17, 2016 Hamline's Creative Writing Programs will host a Graduate Recognition ceremony to honor all the students who have completed their studies and will be receiving an MFA from Hamline University.

During the month of June we will be featuring our soon-to-be alumni as they look back on their time at Hamline University. Today's new graduate is Linda Strahl. 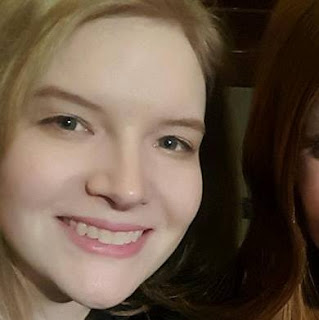 What do you do when you’re not working on packets?

I don’t know how to not be kinky about this answer. I am a lingerie stylist. I can sight size every woman I meet and tell them exactly what bra size they should be wearing. Between 30-40% of women I meet daily do not believe me when I tell them the truth. About 10% would prefer to stay in their own delusion for life. And then the other 50% are convinced when they put on the perfect fitting bra. My favorite moments are when I can impact a woman’s life to the point where she sees herself as beautiful in the mirror. I remember not feeling beautiful, which is why I love my day job, because I get to change that for at least one woman a day.

How did you hear about the Hamline MFAC Program?

Randomly. I went to the Chicago’s Writers Conference in September of 2014. I know what you are thinking. “A writer’s conference is exactly where you hear about MFA programs.” Not this time. I went, learned many things from brilliant writers. I even walked Chicago all of that weekend because I was so inspired by the meetings, I needed to write about the city.

Again, I know what you are thinking, “Well when someone sees another person writing. They would mention MFAC to that person.” I completely agree, the next time I see a person writing I will go up to them like a Jehovah’s witness and say, “Have you heard about Hamline?” Again, you are incorrect.

The randomness came after all of that writing and walking around. I went to my first ever MeetUp group and it just so happened to be on the last day of the Conference. I was planning on not going, but I went anyways. I met this wonderful person who had only spent a semester with the program. She went on to do something else, but she said, “You know from what you are telling me about your writing, you should totally apply to this program at Hamline University…” Do we see how Jehovah’s witness that sounds? If you are a part of the program, the correct answer is, “I have no idea what you are talking about. Have you heard about Hamline’s MFAC program?”

What was your writing experience prior to entering the program?

I was a self-persecuting poet from the age of thirteen up until I attended my first poetry writing class at Bates College. The professor said I was archaic and needed to get out of my own head. A very strange man, he ended up loving my migraine poem later that year.

I became a self loathing female at the age of 22 because I had been in a car accident and suffered from all sorts of injuries. Including PTSD, scars on my right arm (totally ask me about them they are super cool), and metabolic syndrome as a result. I also found out I had more than a few mental problems to deal with. 2007 was actually not a year I ever want to relive.

I became a gothic writer at 23. Influenced by the Introduction to Creative Writing Professor at UW- La Crosse. The man said, “Tell me more,” and I did. Serial Killer novels will be written someday.

I did not become a full contemporary poet until I met Dr. Simone Muench (named because she deserves the recognition) at Lewis University. She taught me that my moods did not control my writing. I had to write no matter what mood I was in, just to see what that mood would create. This was the subliminal lesson that I gained from her tireless efforts at dealing with one of her “worst students.”

I was later volunteered to work at Jet Fuel Review. I blogged, edited and participated in writing so much that I became addicted to the creative process. My senior year with Dr. Muench we stalked each other in and out of classrooms, and I refurnished a Sherlock Holmes chapter with Zombies. That piece, was what I submitted to Hamline MFAC program two years later.

What do remember most about your first residency?

I discovered that I was in my own little universe of like-minded people at my first residency. I was talking to myself in the hallway because I couldn’t remember how to think internally. A student passed by and said, “What did you say?” I said, “Oh nothing I was just talking to myself.” He looked at me and said, “Oh that is totally normal here.”

Have you focused on any one form (picture book, novel, nonfiction, graphic novel) or age group in your writing? Did you try a form you never thought you’d try?

There was no focus. I tried something new every semester. When I went to the Chicago MFAC workshop, they said I didn’t have to just try one form. I could try all of them. So I did. Except graphic novel. This just means that I will have to come back.

Tell us about your Creative Thesis.

How could I not?! I spent a majority of my Hamline time, trying to understand Critical thinking mindset. This is important because it was the reason I really wanted to do this program. I could not fathom being about to write a coherent critical essay. I needed to learn this. When I finished my Critical Thesis, I was impressed with myself. And then the other shoe dropped. I love Creative Thesis because it gave me the ability delve into a project that I had just thought about for a few months. I went from having an idea, to having six pages, to having twenty and then fifty and then one-hundred. Now I can say that I wrote one hundred and twenty pages in draft and strangers look at me like I am a genius. I love that.

Now if you would like to know about WHAT my Creative Thesis is about I will give you the scoop. Because names will most likely be changed, I will say this: Eddie is the Hessian cousin to the Romanov children. Hidden amongst the servants and staff of Catherine’s Palace, she witnesses the tragic family’s struggle with the weight of Russia’s people, the danger one man can bring, and the blessing and curse of truth and magic.

What changes have you seen in your writing during your studies?

Did I mention the one hundred and twenty pages? I was just a poet before Hamline. Now, as a writer, I can create at a comfortable pace. Building a world, creating character arcs, discovering where the foreshadowing and tension can really impact the reader. I am getting better at setting and details daily.

I have also learned that it is ok when my characters decide to go off and have a relationship with each other for two scenes without telling me. Makes the surprise more convincing for the audience, when even the author doesn’t know until THAT moment.

Any advice for entering students or for people considering the program?

It never gets easier. You just get better at dealing with EVERYTHING.