On Sunday, July 16, 2017, Hamline's Creative Writing Programs will host a Graduate Recognition ceremony to honor all the students who have completed their studies and will be receiving an MFA from Hamline University.

During the months of June and July we will be featuring our soon-to-be alumni as they look back on their time at Hamline University. Today's featured graduate is Aimee Lucido. Aimee lives in San Francisco, California. Find Aimee at www.aimeelucido.com and @aimeelucido on Twitter.

What do you do when you’re not working on packets? 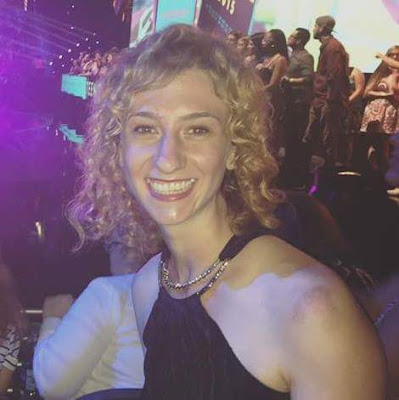 I'm a full-time software engineer at Uber (which ends up being about half actual software engineering and half working on our diversity & inclusion efforts), and lately that has me traveling a lot, so much of my writing has been done on planes these days.

But for fun (and profit) I write crossword puzzles and perform with my musical improv team Flash Mob Musical. I also love to run stupid-long distance, see musicals, eat pasta, and play Zelda with my boyfriend.

How did you hear about the Hamline MFAC Program?

About two years ago I was at a different company than where I am now, and I was fairly unhappy. I remember sitting in an interview one afternoon and the candidate wasn't doing very well, and as the time ticked down I thought, "thank goodness, in ten minutes this will be over and I can go back to work."

But then I remembered that in ten minutes I had to go back to WORK.

So I had a minor panic attack, considered quitting right there on the spot, but then I collected my bearings and I decided the mature, responsible thing to do would be to figure out what I would want to do instead before I abandoned my primary income source.

I started researching internships at literary agencies and I ended up interning with Ayanna Coleman at Quill Shift for six months. It was remote, so I didn't have to quit anything, or move anywhere, and best of all I could do it without even telling my boss I'd taken on a part-time job.

I was just reading and editing stuff from the slush pile, but I loved it so much that at the end of the internship, Ayanna and I talked about what I was going to do next. While pursuing agenting or publishing was an option, she sensed (correctly) that I wasn't quite ready to leave my cushy day job just yet (though I have since switched companies and am far happier now). She told me about something called a "low-residency MFA" and gave me some websites to look at that focused on young adult writing.

The ones that stood out were Vermont and Hamline. Vermont's deadline had JUST passed (literally earlier that week) but Hamline's was... Two days later!

I assembled an application that same day, applied, and within a month I was at my first residency.

What was your writing experience prior to entering the program?

I had a bachelor of arts in literary arts from Brown, where I did my undergrad, and I had written two full "novels". One was my thesis for my degree in college, and one was how I spent my summer before going off to work. The first novel is a pile of junk but the second one I'm still holding onto in hopes that I may find it a home!

What do especially remember about your first residency?

So many times in the "real world" you're sitting in a meeting, or in a movie, or at a dinner and you're thinking of all the things you could be doing instead. But I never once had that feeling at residency. Every lecture, every reading, and (especially!!!) every one-off conversation with my Hamlettes. It was like "oh so this is what it feels like to love what you're doing!"

Have you focused on any one form (PB, novel, nonfiction; graphic novel) or age group in your writing? Tried a form you never thought you’d try?

I came in thinking I wrote YA and it turns out I write everything but. My voice tends toward middle grade, so a lot of what I've ended up with falls in different areas of that age group.

But I did a fair bit of exploring! Before Hamline I hadn't even read a picture book (since I was, say, three) and now I've written, like, ten, and some of them are actually good!

I also tried writing a graphic novel (didn't get too far before I got distracted by my actual attempt at a YA, but I'll come back to it!), and my creative thesis ended up being a novel in verse.

No way I would have tried that two years ago.

Tell us about your Creative Thesis.

WELL SINCE YOU ASKED!

THE MUSIC MY KEYBOARD MAKES is a middle grade novel in verse about a twelve-year-old girl named Emmy learning to program in Java. She's painfully shy, winding up in the computer class almost by accident, but she finds herself connecting to the course material, often going so far as to incorporate it into her poetry. Through the language of computers, Emmy builds a relationship to herself, her school, and her classmates. But as the real world starts provide challenges of its own, she finds herself wishing everything in life could be broken down into a series of ones and zeroes.

What changes have you seen in your writing during your studies?

Any thoughts for entering students or for people considering the program?