On January 19, 2014, the final day of the upcoming residency, the MFAC program will have a Graduate Recognition ceremony, honoring the 11 men and women who have just completed their studies and will receive an MFA from Hamline University. Between now and residency, on Tuesdays, Thursdays and Fridays, we'll be posting interviews with each student. Miriam Busch is today's grad; she lives in Illinois. 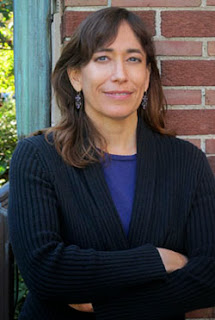 How did you hear about the Hamline MFAC Program? I was attending a Highlights Whole Novel Workshop. Anne Ursu and Laura Ruby ran it, and (MFAC grad) Christine Heppermannassisted. They talked about Hamline, about this community of writers striving for excellence. I told myself I had no interest, but somehow I found myself chatting with (program director) Mary Rockcastle.

What was your writing experience prior to entering the program? I had been writing stories for kids in secret for a while. I had published an article related to my old life in a scientific journal, and wrote an early reader for National Geographic Kids.

What do especially remember about your first residency? Each residency strikes me with how spectacularly devoted and generous and supportive the faculty, administrators, staff, and students are. Everyone shares this deep love of/compulsion for writing for children. It’s wonderfully satisfying to live among fellow travelers/creatures from the home planet, if only for eleven days every six months.

Have you focused on any one form (PB, novel, nonfiction; graphic novel) or age group in your writing? Tried a form you never thought you’d try? I tried everything except non-fiction here at Hamline. When I entered the program, I was mostly drawn to middle grade fantasy and picture books, but in addition to working in these genres, I tried a YA verse novel and a graphic novel. The latter two are forms I never imagined I would try.

Tell us about your Creative Thesis. Mighty Cave Chickens is a middle grade graphic novel. The premise is silly (our three chicken heroes embark on a quest to save their rogue clan and themselves), but my advisor (Gene Yang) encouraged me to forge beyond simple silliness, to explore the deep longing at the protagonists’ cores. Starting something new for the Creative Thesis is not recommended, but Gene liked this idea more than a different novel I was considering converting. Graphic novels require detailed visual description for the illustrator—huge challenge for me, as I was accustomed to the picture book format, where illustrator’s notes are frowned upon and generally unnecessary. But here’s what I learn (repeatedly): no matter the format, any story must satisfy the foundational basics covered in each residency.

What changes have you seen in your writing during your studies? I entered the program entirely unschooled, and now I have language and tools (and fellow writers!) that allow me to assess how (or if) pieces work. Before, I might have been able to sense something was missing in a manuscript, but now I can figure out what. Also, instead of my pre-program sole method of meandering-on-the-page-until-something-sticks, I now can make a deliberate choice between several modes of working.

Any thoughts for entering students or for people considering the program?
Most of us don’t have the perfect office or steady, uninterrupted writing time. Many of us have stretches where we have only 15 minutes here and there. Just write. Never give up. Write between the cracks of needy children and ill parents (or needy parents and ill children). Keep in touch with your classmates. Write. If you are thinking about entering but aren’t sure you can commit, do the mini-immersion. (Fair warning: it’s a street-dealer trick. 1. They give you a taste. 2. You’re a goner.)