Publication Interview with Elizabeth Fixmer: Down from the Mountain

Please describe the book.
Down from the Mountain is contemporary fiction in which a fourteen-year-old girl begins to question the prophet of the religious cult in which she was raised. Righteous Path members are isolated, schooled on the compound, and taught to fear the outside world of “heathens.” But Eva’s journey into critical thinking begins when a new member, a teacher, brings books from the outside and Eva reads The Lion, the Witch and the Wardrobe by CS Lewis. When Eva learns that this book is an allegory and Aslan represents Christ, the idea of god as loving verses the capricious, fear provoking one that Prophet Ezekiel portrays, resonates deeply in her heart.

When money dries up and the group faces the possibility of starving over the long winter to come, Ezekiel allows Eva to make jewelry and sell it at the Boulder flea market. But he uses much of that money to buy guns believing that they must protect themselves against the government, former members and nosey reporters.

Things really heat up when Eva’s mother has difficulty with her high risk pregnancy and may die without the medical attention denied all members. At the same time Ezekiel announces that he will marry Eva when she turns fifteen. Eva must finally decide what she believes and what she must do.

As the story progressed from inception to copy-edited version, what were the major changes? How did those changes come about?
I have more versions of this book than I care to recall. In the first version, Eva is kidnapped from the cult by men her father hires for this purpose. The problem with that version was that most of the action took place after Eva was kidnapped from the cult and that was far less interesting than her experience inside the cult. The second problem was that I wanted Eva to become strong enough that she would leave on her own without being forced to leave.

In another version I made Jacob and Eva co-protagonists and told their story using alternate voices. I wrote the story in third person past tense, then shifted to first person present tense so that the reader would share greater intimacy with the protagonist. I had as many titles as versions. Finally it was the Albert Whitman team who chose Down from the Mountain, a title that has multiple meanings. It is both literal and symbolic.

When did you first begin work on it? When did you finish?
I started work on this ten years ago. I sent the first chapters to the Highlights foundation at Chautauqua where I spent a wonderful week several years ago. It was critiqued by Carolyn Coman. She encouraged me to get an MFA from Vermont. I applied and was accepted. I continued work on it with my first advisor, Cynthia Leitich Smith. When the Hamline program opened, I continued my MFA there and worked with Carolyn Coman for my first semester there. I was really tired of the manuscript by then and started, Saint Training, (ZonderKidz, 2010) under the tutelage of Gary Schmidt for my two final semesters.

Once my first book was published I continued to work on Down from the Mountain under the guidance of my agent Minju Chang, and my incredible critique group. When the manuscript was purchased by Wendy McClure at Albert Whitman, her excitement about it breathed new life into it. Under her guidance I continued editing it until literally days before the first printing. I seriously wonder sometimes if it’s the most examined and edited book ever.

What research was involved before and while writing this book?
Long before I wrote this book I read everything I could get my hands on about cults – especially the psychology of cult leaders and participants. As a psychotherapist in private practice in Denver, I had occasion to work with individuals who were recovering from their religious cult involvement and on some occasions even worked with people who were active participants in a cult, who sneaked off to see me so they could explore their doubts. I only needed to review all that I had learned about cults in order to write this book. 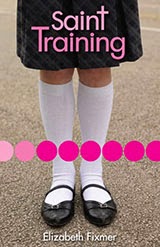 Saint Training, your first book, was published in 2010. What have you learned about the business of writing since then?
The business of writing is complex, ever-changing and varies from house to house.  I’ve learned that book acquisitions are very impersonal and that your book may be passed up simply because it doesn’t fit the vision of that house. A genre or even a subject may be hot and then suddenly it’s not. I was told by more than one publisher that “dystopian fiction was losing popularity.”

Now that I’ve had the experience of working with two publishers I see differences in big and little things. One made up a great marketing plan; the other left that almost entirely up to me. One gave me input into the cover design and title, one did not. I’ve also learned that I can adapt to the difference between houses, and that what’s most important is working with a good editor. I’ve been blessed with good editors for both of my books. Their enthusiasm made the editorial process fun and exciting.
Where do you do most of your writing?
When my writing is going well I sit at my computer in my office. But when I’m stuck or dragging, I stay in bed and write by hand until I’m in a better place. Writing by hand in my comfortable bed makes the process less serious and reduces any anxiety I might be fighting.

Do you remember the first book you loved?
As a small child I loved Winnie the Pooh, and the Dr. Seuss books, especially Horton Hatches an Egg. As an older child I loved many books, but Gone with the Wind stands out as one of my favorite.


Elizabeth Fixmer  is a January 2009 graduate of the Hamline MFAC program. She lives in Ft. Atkinson, Wisconsin. To learn more about her and her writing, please visit her website.