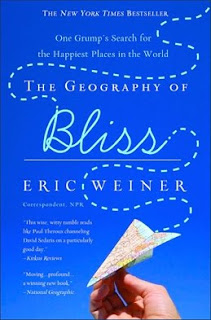 So you think I am going to write about journaling on white, sandy beaches and critique sessions over an ice cold pitcher of margaritas? Where is writing paradise? That's what we all need to know to be successful writers.

At a recent writing group a friend arrived with the book The Geography of Bliss in her hand. I begged to borrow it. Don't you want to find your bliss? Written by a self-named grump, journalist Eric Weiner travels the world in search of happiness. Where do people love their lives? In the nation where they appreciate literature and the arts.

Turns out, it's all about community and a sense of history. Something a place like Qatar doesn't have. Oil-rich Qatar is filled with malls but only one bookstore.

But back to that cold place. Being a writer in Iceland is the best thing you can be. "Better to go barefoot than without a book," a favorite sayings goes. The government supports writers with generous grants. Have you bought your plane ticket yet? Yes, it's dark and cold much of the year. But it produces more writers and artists per capita than any other country. Why?

1. They love their language, even more than their country. As Weiner writes, "A love of language may not guarantee happiness, but it allows you to express your despair eloquently , and that is worth something. As any poet (or blogger) knows, misery expressed is misery reduced." I feel better already.

2. They harbor minimum envy. In Iceland failure isn't a stigma, but a badge of honor if you have given it your best shot. Weiner writes about how Icelanders believe that artistic failures shouldn't be framed or published, but that the crap becomes compost for the great stuff to grow.

He concludes his section on Iceland by stating that happiness is a choice. So is being a writer. It doesn't matter where we live. We can choose every morning to write crap so the great stuff can begin to grow. Paradise.
Posted by Claire Rudolf Murphy at 10:19 AM