Inkpot readers! Did you know you have one degree of separation from Hollywood history? Our own Ron K. lives in a house that might be familiar to terror movie fans. He's kindly shared a couple of photos and explained them. 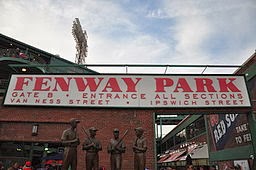 Today is "Faculty Voices" day on the ‘Pot, and what’s a blog wrangler to do when those voices are at rest because the owners of those voices are busy launching books or working on or preparing for packets or have their thoughts turned toward Fenway Park? Also, Lady Em dropped the ball on cracking the whip.

In other words, nothing to post. So how about this list comprised of 1. Faculty blogs you might want to read 2. Recent (or fairly recent) guest blog posts or interviews the MFAC fac members have done for other sites 3. Quotes compiled by readers on Goodreads (who knew?). This is hardly an exhaustive list—please add to it in the comments section.


And now the blog roll, in no particular order

One more thing ...  A faculty voice many grads and students like to conjure up when away from Hamline belongs to Jane Resh Thomas. There are plans afoot to bring you an special edition Inkpot interview with Jane. Until then, enjoy this post she wrote for the 'Pot.
Posted by Admin at 4:36 PM No comments: 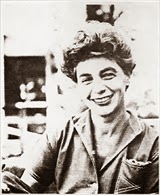 "Ruth Krauss was born in Baltimore, Maryland, in 1911. She attended the Peabody Institute of Music in Baltimore and received a BA from the Parson’s School of Applied Art in New York City. During the 1940s and 1950s, Krauss spent time at the Bank Street Writer’s Laboratory, where authors were encouraged to work directly with children; her A Hole Is to Dig (published in 1952) was written collaboratively with nursery school students and was illustrated by Maurice Sendak."
(From the New York Review Books)

And check this out.
Posted by Admin at 8:00 AM No comments:

Last weekend I had the good fortune to spend time with MaryLogue and Gene Yang, MFAC faculty members past and present. Both were in Eau Claire to be part of the annual Chippewa Valley Book Festival.

While Gene was wowing a room of readers over on the local university campus, Mary was doing the same at our public library. I sat in on Mary’s session, “Cozy vs. Noir,” in which she talked about the differences in the various forms of mystery novels.

As daughter #1 and I are in the process of writing a novel together, and as said project is turning out to be a space opera murder mystery, I was an attentive listener in the room.

Mary mentioned one thing that I’d heard her say before, and it’s always stayed with me: When imagining the protagonist of what would turn into her Claire Watkins mystery series, she knew she would make her a mother because she “wanted her to be vulnerable.”

We who write for and about children don’t have to work too hard to identify how our protagonists are vulnerable—it comes with the territory of being young. Nevertheless, everyone has a specific vulnerability, and identifying it, as Mary did for her heroine, and working it can be a terrific plot and character developer.

One common point in my YA novels is that my protagonists have generally been emotionally and financially secure young women, and, for the sake of the plot, that very security is their vulnerability. How does a character behave when something is lost, either by accident or of her/his own doing? What’s the difference? How about when something is taken away?

When I entered college during the Vietnam era, the college chaplain would invariably end services or other gatherings with his favorite benediction: “Comfort the troubled and trouble the comfortable.” 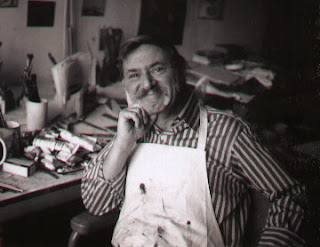 "At an early age, Jacob, known later to the world as Ezra Jack Keats, became interested in art. His mother encouraged Keats' talent, but his father seemed only to criticize Keats' ability. Working at Pete's Coffee Shop in Greenwich Village, Benjamin Katz knew how hard earning a living could be. He felt that his son could never really be successful as an artist. However, his father did purchase tubes of paint for Keats under the pretense of having traded bowls of soup to starving artists. 'If you don't think artists starve, well, let me tell you. One man came in the other day and swapped me a tube of paint for a bowl of soup'."

(From "Ezra Jack Keats Biography," a site maintained by The de Grummond Children's Literature Collection at The University of Southern Mississippi.)
Posted by Admin at 8:00 AM No comments: 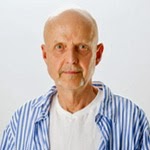 Ever since the Inkpot was launched a few years ago, Ron Koertge has been a stalwart contributor. He’s taken a well-deserved break, but when he sent a link to a blog post he did for Poet’s Playlist we thought we’d share it here on Faculty Voice day. Poet’s Playlist is a Tumblr for which poets are invited to create soundtracks for their books through revealing playlists.

Here's the link. Click it and enjoy.
Posted by Admin at 8:36 AM No comments:

Wanda Gág is internationally known for her lithographs and as an author and illustrator of ten children’s books, including Millions of Cats. She translated and illustrated two books of Grimm’s Fairy Tales from the original German. She was born in New Ulm, Minnesota, in 1893, the eldest daughter of Anton Gág, a well-known regional artist and photographer. She went to art schools in the Twin Cities and New York on scholarships. Wanda created most of her art and writing at her All Creation home in New Jersey. She died in 1946.

Shakespeare and Company: A literary shrine

Early this September, my husband and I traveled to Paris for the opening of my son’s art show. While we were enjoying the City of Light, I insisted that we visit Shakespeare and Company, the famous bookstore on the Left Bank. John dragged his feet (after all, we’d been there a few years earlier), but I was determined. It wasn’t just because I wanted a book to read on the flight home—though happily, I found a used copy of Penelope Lively’s Tiger Moon in the stalls outside the store. My need to visit the bookstore was visceral.  In an age of vanishing independents, I needed to honor a store that has been a magnet for book lovers and writers for almost a century.

A visit to Shakespeare and Company is a sensory experience. Warm, inviting colors welcome visitors, from the fir-green entrance to the many-hued book jackets inside.  New books on the ground floor smell fresh, while the secondhand titles upstairs are as musty as the old desks and beds that have served writers for years. Books line the shelves from floor to ceiling and cover every flat surface. It seems as if their weight could tip the store out onto the Rue de la Bûcherie. Signed photographs of visiting writers and artists are tucked away in the few spots of bare wall. Although most books are written in English, a Babel chorus of languages fills the tiny aisles. Tourists visit from around the world.

As I wended my way through the maze, I imagined Lawrence Durrell, Samuel Beckett, and William Burroughs climbing the stairs to write at one of the tiny desks. I thought of the many penniless writers who slept in the store’s narrow beds and wrote—in exchange for a daily two-hour stint at the cash register and the promise to read a book a day. I pictured Anäis Nin tucking her Last Will and Testament under Henry Miller’s bed. (An appropriate action, given their shared history.) I thought of the original bookstore under this name, run by Sylvia Beach. She famously hosted Hemingway and published James Joyce’s Ulysses. According to legend, Beach shuttered her bookstore during World War II rather than sell a copy of Finnegan’s Wake to a Nazi.

I felt connected to the thousands of writers and readers who had made this pilgrimage before me, breathing in the same dust, soaking up the aura of a store that has inspired books—such as Hemingway’s A Moveable Feast—or made cameo appearances in films, such as Woody Allen’s Midnight in Paris. Visitors enter this literary shrine with the same hushed reverence as those who walk the stone aisles of Notre Dame, across the Seine. 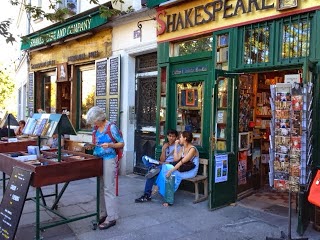 Publishing—and everything else related to books—is changing fast, and no one knows what will happen to books and their creators. One of my OP novels is about to be issued as an e-book only, while my most recent young adult novel will be published as an e-book with a print-on-demand option. Yet our passion for the printed book is undiminished. We still want to feel a book’s weight, to study its design, dog-ear its pages, smell its paper. (Yes: a book can be an Endowed Object.) We like the secrecy and privacy of a printed book.  Like many children, I read under the covers with a flashlight when I was supposed to be asleep. Now I use a penlight, quietly turning the pages in those dark hours when sleep escapes me.

While many predict the demise of the printed book, recent reports note a surge in the number of independent bookstores opening around the country. One of our special favorites, the Northshire Bookstore in Manchester, Vermont, has just opened a second store in Saratoga Springs, New York, and reports a brisk business. Like other indies, the Northshire has branched out to sell toys, household items, clothing, and gifts. Another local favorite, Porter Square Books in Cambridge, Massachusetts, also thrives. Tasty cafés, Internet connections, and a full slate of author events draw customers at these and other independents.

Shakespeare and Company is not immune to the modern realities of bookselling. A few years ago, Sylvia Beach Whitman (named for the founder of the original store) took over management from her father. She installed a phone and computer (to his horror), started a literary festival, and began hosting author signings and other events. But the store’s ethos and purpose haven’t changed. Even a brief visit made me feel part of a literary community that connects books, readers, and writers across time, oceans, and national boundaries. I can’t wait to go back. 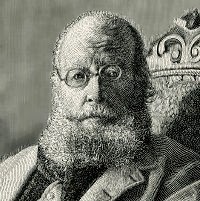 EDWARD LEAR
Born 12 May 1812 in the London suburb of Holloway, Edward Lear was the twentieth of twenty-one children (and youngest to survive) of Ann Skerrett Lear and Jeremiah Lear, a stockbroker. Many of the Lear offspring did not live beyond infancy, so Edward's very survival had something of the fortuitous about it. Even though he lived to be seventy-five, his health was always delicate; he had poor eyesight and suffered from chronic respiratory problems. At the age of five he experienced his first epileptic seizure. For Lear this "Demon," as he dubbed his affliction, was a mark of shame. Much of his self-imposed isolation from those he loved derived from his need to hide his condition from them. (From the Poetry Foundation website.)
Posted by Admin at 8:00 AM No comments: