When the Magic Happens

When we crossed into Montana from North Dakota at 3:00 pm, I checked the train schedule. We were running three hours late. At sunset, we were still moving through the Montana prairie. We wouldn’t reach the mountains until the middle of the night. And by the time the sun would rise the next morning, the mountains would be far behind us. I was going to miss the Rockies completely.

I keep expecting life to happen according to my plans. And when circumstances don’t turn out as I expect, I get frustrated. This happens with mountains as well as writing. And while frustration about not seeing some mountains may lead to a few hours of grumpiness, frustration in my writing process can lead to paralysis.

I sometimes feel that my writing success on any given day is due to chance. Some days the writing just seems to flow. Other days, I find myself unable to write anything. But when I analyze these two types of days, I see that the differences are not due to chance at all. My success or failure is directly related to expectations I bring to the chair. If I’m holding tightly to an expectation of accomplishing a certain goal, I almost always find myself struggling for every word. But if I come to the chair with my only expectation being that I’m going to spend some time there writing, I find much more success.

My train finally rolled into Rocky Mountain country at 11:00 pm. By this time, my grumpiness had passed. I had come to terms with the fact that I wouldn’t be seeing the Rockies. So, not really expecting anything, I looked out the window. It was near pitch black, and at first, I didn’t see anything. But after my eyes had time to adjust, I could see the faint outlines of mountainous shapes in the distance. It wasn’t the grand moment I thought it would be, but I felt thankful I’d gotten a glimpse of the mountains at all. I continued staring out the window in awe of the immensity that I couldn’t quite see but that I knew was surrounding me at that very moment.

A few minutes later, the clouds broke, revealing a perfectly full moon. She shined her light across the frozen landscape, and there were the Rockies, not just snow capped, but snow covered in all their winter glory. We crossed that trestlework bridge, its moonlit shadow falling across the snow-dusted pines in the valley, while frothy clouds hovered over the mountain peaks in the distance. It was beautiful and magical and not at all like I had planned it to be. It was so much better.

Just like my moment in the mountains, I’ve found that my best writing can’t be planned. It seems to come like a gift when I least expect it. And that’s really the point, that I don’t expect it at all. When I can go to the chair and just write, with thankfulness for what little I can see and awe for the yet-to-be-seen immensity that I know is there, that’s when the magic happens.
***
Mandy Davis is a July 2011 graduate of the MFAC program. She lives and writes in Minneapolis, MN.


On Emptiness
There is a zen koan about a visitor asking a monk about zen.  The monk pours the visitor a cup of tea until the cup is overflowing.  “It’s full!” the visitor says.  “Like this cup,” the monk says, “you are full of your own thoughts and obsessions.  I can only show you zen when your cup is empty.”

The same is true with writing.  You sit and you wait.  Maybe you read a little, or look out the window.  In other words, you write out of silence, and staring into space, and total undistracted attention.  Great ideas come out of emptiness. 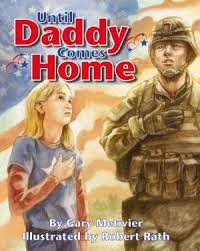 Gary Metivier is a January 2014 graduate of the MFAC program. His picture book Until Daddy Comes Home was published by Pelican Publishing in February. It was illustrated by Robert Rath. Gary lives in Davenport, Iowa.


Please describe the book.
A little girl and her father find a way to stay connected even though he is being deployed overseas. They come up with their own pledge and promise to say it at the same time every day to give both of them strength. As weeks turn into months and they miss several special dates/events, the little girl must work harder to overcome not having her daddy around. In the end, she comes up with her own ways to keep growing and helping him stay strong too.
As the story progressed from inception to copy-edited version, what were the major changes? How did those changes come about? When did you first begin work on it? When did you finish?I made major changes to the pledge part of the story they came up with to share. It is much shorter, more direct, rhythmic and easier for read-alouds. I also decided (with the help of Hamline folk) to have the pledge repeat throughout with a twist in the final pledge.

The story itself is also about half as long as the earlier versions.

I actually went back and forth with the publisher over things like title, age-appropriateness of characters and events and overall theme of the book. I won some ‘battles’ and ‘lost’ some.

I spent about 1 ½ writing, revising and editing this book. I finished it last summer.

What research was involved before and while writing the book?
This picture book was inspired by several stories I have covered in my day/night job as a TV journalist. I have profiled families dealing with having to say goodbye to a family member being deployed. I have also been able to attend some surprise homecomings as well. Really what I wanted to do was tell the story of what happens in the middle, the part that doesn’t get covered on TV: 1)The living life without the parent there; 2) The missed moments like Valentine’s Daddy Daughter Dance, Christmas, 3) and mornings when the hurting is just too much.

I talked with many different families about all aspects of this –mostly the children.


Willie’s Wagon, your first book, was (self) published in 2007. What have you learned about being an author since then?
Although I had a good amount of success with my first two books on my own, I knew I didn’t have the expertise to do it all on my own. Beyond the obvious marketing and promotion aspects, I learned that I need creative input to take a project to the next level. Other writers have suggested elements that prompted me to jump out of my seat and say “Yes! That is exactly what I need here!”  Sometimes we are too close to our own work to see the flaws or even the opportunities that can make it so much better. I am no longer hesitant to turn to others for input—and to trust myself to know what to use and what won’t work for me.

Revision. Cutting. Revision. Focus. More cutting of some of your ‘must-haves’. And yes, I have experimented with cutting too much and feeling like I have gutted my characters. A great exercise in the end.

Where do you do most of your writing?
I have a little home office in the back of my house. Good solid door, and nice big window. And a good amount of music to drown out everything else.

Do you remember the first book you loved?
Holes—blew me away.
Black Like Me—captured my attention in the third grade and has never let go.


***
To learn more about Gary, read an earlier Inkpot Interview.

Writing Conferences - What's in It for You?
AWP April 2015 Minneapolis

It's always a tug, isn't it, dear writers? Writing or out in the world, promoting, going to conferences, working to pay the bills, sharing one's writing, responding to other writers, teaching . . . The list is endless and it's easy to come up with ways to avoid BIC - butt in chair. But there are times when it is an excellent idea to attend a conference - to get filled up, stretch one's boundaries, listen to those in your chosen genre talk about their craft, suss out an agent or attend a session on a topic way far from your own work.

All of you reading have attended one conference or another, most likely an SCBWI one, a great resource for children's writers. I have another one to suggest - affordable, packed full of intriguing sessions and, for some of you, right in your back yard:


AWP stands for Associated Writing Programs and next year our esteemed leader Mary Rockcastle will be one of the co-chairs and Hamline University one of the co-sponsors. The conference offers a discount for current MFA students and alums. More will come out on that in the months to come. But put this date down on your calendar.

Two weeks ago Emily Jenkins posted on this blog about her adventures at the Seattle AWP. Check it out if you haven't read it yet. Emily and her cohorts were terrific, just what you want a panel to be - vibrant, knowledgeable, funny, and each offering a different perspective. Current MFAC student Judi Marcin was also there and it was great to share notes and talk about our hopes for a Hamline presence next year in Minneapolis.

Come one, come all. Not only am I encouraging you to attend, but to consider putting in a proposal to present if you are ready for that. In Seattle there were 15,000 hungry writers in attendance from all genres and all levels of experience, and hundreds of presentations over three days. This was my first AWP conference, but I've been told that the children's and YA panels are growing in number every year. The ones in Seattle were packed. So the interest is there.

I am hoping to see even more next year, especially on illustrated books, graphic literature, fantasy, YA LGBTQ literature, the structure of an MFAC program, and life after getting one. The panels I most appreciated had excellent, varying content and strong presenters across the board. They didn't always agree, but rather each took a different approach to the topic. Presenters often came from different programs, different parts of the country and for some topics - different genres.

Here are some of the intriguing session titles:
Check out the 2014 schedule and more information on the presentations at the Seattle conference.

To propose a panel for 2015, check out the guidelines. Writers of all sorts gave presentations, long published ones, faculty on MFA programs, current students, alums, writers publishing online and in many publishing forums. Think about it, and remember these key dates:


I bought Ron Koertge's new poetry book at the Red Hen Press booth and met his lovely wife. He attends every year. Let's join him in Minneapolis and bring Hamline MFAC to 2015 AWP conference in a big way. Ricki Thompson, Emily Jenkins and several of our faculty have presented at AWP before. Talk to them or get in touch with me if you want to bat ideas around. I know that Mary Rockcastle will be sending out info, too. It will be an exciting time indeed.

Now back to writing.