Lady Emfak is not really obsessed with dead authors, she’s simply curious about them, especially the dead authors who’ve written books MFAC students are required to read. With that, she announces a new PF feature: Getting to Know Your (required) Dead Author.


Now if you will excuse her (and you will), Lady E has a rendezvous with three hussies. 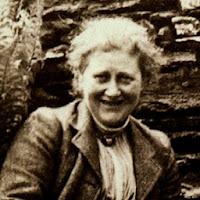 BEATRIX POTTER
Helen Beatrix Potter (1866–1943) was born on 28th July 1866 at 2 Bolton Gardens, in Kensington, London to a wealthy family. Both Beatrix's parents lived on inheritances from the cotton trade and, though qualified as a barrister, her father, Rupert, focused much of his time on his passion for art and photography. He and his wife, Helen, enjoyed an active social life among a group of writers, artists and politicians and the family included many connoisseurs and practitioners of art. Helen herself was a fine embroiderer and watercolourist and Edmund Potter, Beatrix’s paternal grandfather, was co-founder and president of the Manchester School of Design. (From the V&A website.)
Posted by Admin at 8:00 AM 1 comment:


Life itself is the proper binge—Julia Child 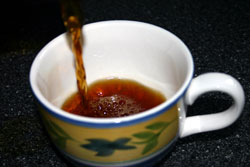 What do our characters eat?  When I read, I see very little mention of meals. Perhaps that’s because writers are taught to avoid table talk scenes as being boring. Donald Maas expresses it in a section of his book called, “Low Tension: The Problem with Tea,” insisting that authors should “cut scenes set in kitchens…or that involve drinking tea or coffee.” Certain food descriptions in literature, though, have become as famous as the books themselves. Few people have read Proust’s In Search of Lost Time, but most know of the reference to madeleines: “No sooner had the warm liquid mixed with the crumbs touched my palate than a shudder ran through me and I stopped, intent upon the extraordinary thing that was happening to me. An exquisite pleasure had invaded my senses, something isolated, detached, with no suggestion of its origin (long memory omitted)...The sight of the little madeleine had recalled nothing to my mind before I tasted it. And all from my cup of tea.” 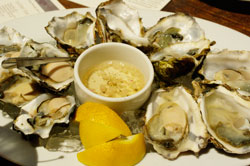 In Hemingway’s A Moveable Feast, he describes a snack imbibed on a cold Paris day that made me travel there after I read it (I was nineteen): “As I ate the oysters with their strong taste of the sea and their faint metallic taste that the cold white wine washed away, leaving only the sea taste and the succulent texture, and as I drank their cold liquid from each shell and washed it down with the crisp taste of the wine, I lost the empty feeling and began to be happy and to make plans.”

There are also fine moments of cooking in literature, such as when Pippi Longstocking makes pancakes for her friends. She “got out three eggs and tossed them high in the air. One of the eggs landed on her head and cracked open, making the yolk run into her eyes. But the other two she easily caught with a saucepan…’I’ve always heard that egg yolks are good for your hair,’ said Pippi…’Just wait and see, my hair is going to start growing like mad.’” 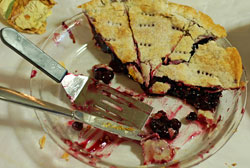 Going back through my books, I found plenty of meals, although not a single cup of tea. More prominently though, I discovered a motif of hunger. Liberty Aimes’ mother consumes “thirty-two pieces of fried French toast, seven pounds of fried clams, sixteen fried hot dogs, two fried chickens, twenty fried hamburgers, six platters of French fries, three platters of fried noodles, a pie (not fried), six ice cream sundaes…” every day, but Libby is half starved. She takes a few bits while cooking. Adam in Aftershock is traveling across the country without money. He is so hungry that he tries to eat a pizza frozen. Walking on Air begins with a rare diner meal, since it is the depression and June and her family are often hungry. She even scores a piece of pie from a kindly waitress: “If I could I would live on pie. It’s as if all of the excess of feeling in these towns-the forlorn brides, the drunks, the lonely old ladies and hungry children-have landed soul-flown in the crust, the weeping apples, the peaches liked babies curved in their ma’s bellies.”

Some of my favorite characters are hungry. Think Dickens and they’ll line up, most notably Pip and Oliver Twist. Then there’s Stanley Yelnats and Zero in Holes being so famished and thirsty that they eat raw onions, which saves their life since it keeps the lethal yellow-spotted lizards away.

As always, there’s some past trauma lurking. My mom was a terrible cook. She baked steak and put large chunks of yellow onion in tuna fish. She boiled vegetables until they were soggy and gray. She even burnt canned soup, then scraped the stuck bit at the bottom into the bowl. I remember a meal she made where the only edible item were frozen peas in cream sauce, one package for six people. One day, my hippy brother moved back home from his naked commune in Santa Barbara, and took over the cooking. He made black bean burritos with grated carrots, caramelized onions, sour cream and avocado; fruit salad aptly called “ambrosia”; gazpacho; and carob brownies. He brewed coffee instead of making instant.

Food is a packed symbol: an apple, a cup of coffee, meat loaf, a bottle of wine. Physical hunger is a metaphor for other kinds of hunger (soul hunger, heart hunger). Our characters are driven by desire, or they may not have a story. What is your character dying for want of?  Sometimes, it’s a good meal.
Posted by Admin at 8:00 AM 2 comments:

Today is Launch Day for The Real Boy (Walden Pond Press/HarperCollings; illustrated by Erin McGuire) and whaddayaknow—author Anne Ursu is our Inkpot Interview.


Please describe the book in under 50 words.
The Real Boy is about Oscar, who works in the basement of a magician’s shop preparing herbs for the customers. But magic is fading, something is lurking in the village, and Oscar will be forced out of his basement and into the world.

This book was a series of revelations—I’d be going to sleep at night and suddenly figure out how the main plot threads came together. I’ve never written something with as complicated a plot before. So most of the changes that were not middle-of-the-night revelations came about because I lay face down on top of my bed and agonized for hours. I think most of the changes involved clarifying and fleshing out. First drafts for me are the process of telling yourself the story—after that it’s the process of turning that story into a working book.


What research was involved, and how did it affect the story’s development?
I’ve never written a high fantasy before—that is, a fantasy set completely in another world. I wanted this to be a vaguely pre-modern island, and I picked the year 1675 to give me a guideline in terms of technology. But I’d start writing and get absolutely frozen—Oscar would be using a lantern and I didn’t know if he would be lighting it or turning it on and I’d have to go scurrying to the internet. I also wanted to make sure any resource used on the island was available on the island, and that helped me flesh out the geography of the world a little more.  But I’m not a detail person and so I had to work very hard.

Without naming names, tell us who your first readers are (e.g., live-action writing group; online writing group; editor; agent). When do you share a piece of writing?
My friend (and fellow MFAC faculty) Laura Ruby reads everything, chapter by chapter. At first she’s a support system—I feel like I’ve accomplished something, and she says nice things. Then when I finish a draft she tells me what she really thinks. I try to fix everything that I know needs fixing before anyone else sees it, and then I give it to my agent and editor.

What books do you love to teach or recommend to students?
I teach When You Reach Me for basically everything—theme, subplots, structure, scenes. Same with Speak. I’ve just started handing Eleanor & Park to people for character and voice. And I adore Patrice Kindl’s Owl in Love for point of view, as well as anything Linda Urban writes.

What widely-loved or acclaimed book is one that didn’t work for you?
Jellicoe Road. I love Melina Marchetta’s other books, and I was so excited when she won the Printz. But I just did not get this book at all. I found it so muddy and convoluted I got angry.

During the January 2013 residency Emily Jenkins lectured on “How to Be Funny,” and one of her suggestions was to “use jolly words.” A good idea even if one isn’t trying to be funny. Do you have a favorite jolly word?
All that I can come up with is lugubrious. I love that word, but it’s not exactly jolly. I’m moving though—I think all my jolly words are in boxes.


***
For more about Anne and her writing please visit her website
Posted by Admin at 8:00 AM No comments: